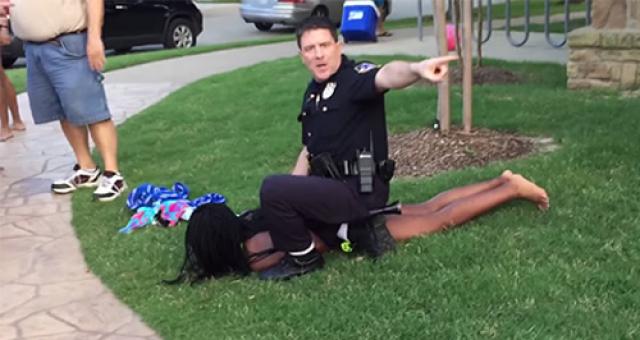 MCKINNEY TEXAS – June 7, 2015 – A very shocking video have gone viral showing a police officer who pulled his gun and threatened Black teens coming to the aid of a young girl being PINNED to the ground by the officer.

The officer was identified as patrol supervisor Cpl. Eric Casebolt, who was pinning a black girl to the ground by her head as she cried for her mother; while other officers were running after teens and aggressively handcuffing them.

According to reports it all started when a resident invited a few of his AFRICAN AMERICAN FRIENDS to a pool party at his home. His neighbors called police when they saw a large number of African American teens acting like typical teenagers in their normally ALL-WHITE NEIGHBORHOOD.

When one young lady tried to speak up for her rights, she was PINNED by the officer. A few BRAVE young man tried to step in to help her, and the officer PULLED HIS GUN on the boys.

Before officers arrived on the scene, a white woman had started making racist comments, telling black partygoers to get used to the bars outside the pool because that’s all they were going to see. Thomas said, an eyewitness.

Dont forget to leaver your comments about the police…