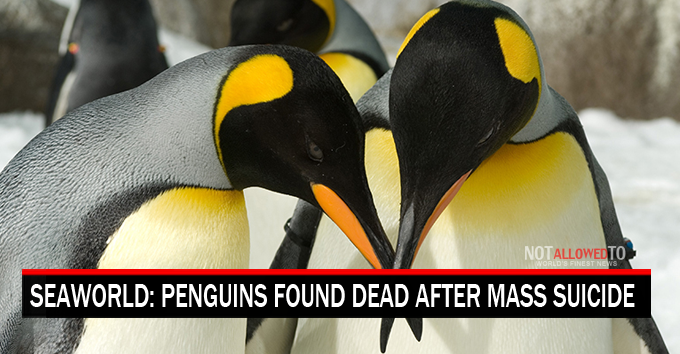 The Seaworld chain of theme parks is now facing another public relation crisis, after an examination on the death 14 penguins in its San Diego facilities on December 22, concluded that the birds committed a mass suicide.

Seaworld worker found 14 dead penguins and 8 other severely injured, at the bottom of a 50-foot high wall. An examination was requested to decide the reason for these mysterious deaths, and the experts have made their their conclusions public yesterday.

According to the report, penguins suffered from severe depression, caused by their “inhumane living conditions”. The marine biologists concluded that the penguins had chosen to commit suicide “in order to put an end to their pain and suffering”.

The corporate curator for Zoological Operations at all SeaWorld Parks, Chuck Tompkins, met journalists early today to respond to report, which he called a “tricky and biased piece of sh*t”.

“The living conditions of all penguins in our theme parks are absolutely exemplary,” said Mr Tompkins. “They are well-fed and have a large enclosure with a pool and everything… Anyways, let’s be realistic, penguins are like chicken, they’re not smart enough to be suicidal! These so-called experts are clearly animal right extremists who want to close all zoos and marine parks.”

This new incident occurs at a really bad moment for Seaworld, which is already struggling to maintain a positive public image.

The corporation has been in the crosshairs of animal rights activists and has experienced a drop in revenue since the release of the documentary Blackfish, in 2013. The movie chronicled the case of Tilikum, a killer whale that caused the death of trainer Dawn Brancheau, in 2010.

Three of Seaworld’s famous orcas have also died over the last six months, and all of them were still very young. The last to date is 18-year-old Unna, who died from a rare fungal infection last week, causing reactions from many animal rights organizations.