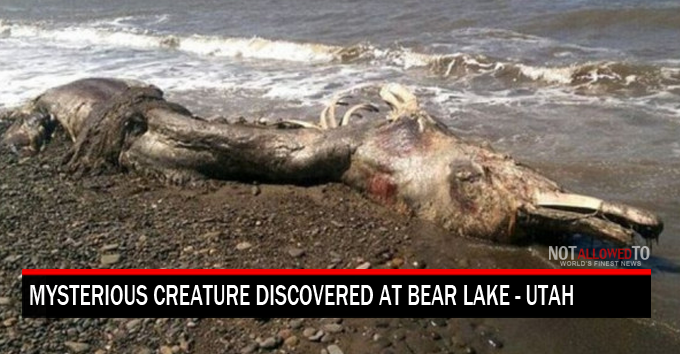 Utah – The remains of a bizarre and unidentified creature resembling a dinosaur, were found this morning at Bear Lake, many believe its the legendary monster associated with the site.

Reportedly, the decomposed body was found by James and Christina Wilson, who were walking on the lake’s shore and noticed a strong foul smell while they were still hundreds of yards away and decided to investigate, leading to the discovery 25-foot (8 m) long carcass.

“We walk here every day, but we have never seen anything like this,” says Ms. Wilson. “We could smell the stench from almost a mile away, and we knew that there was something wrong. When we finally found the corpse, we couldn’t believe our eyes. It’s really huge and it almost looks like a rotting dinosaur!”

Experts from the Utah Division of Wildlife Resources, was rapidly dispatched on the site to inspect the mysterious creature.

According to the experts, the decomposed remains look similar to a crocodile or a mosasaur, an extinct group of large marine reptiles, but more tests and analysis are necessary to determine the true nature of the creature.

“It seems obvious that this creature was some kind of large marine predator, but the exact nature of the animal as yet to be determined,” Dr. Upton, the lead expert, told reporters. “It definitely looks like a lot like a crocodile, but as few distinct features which suggest that it could be another type of aquatic reptile. The creature’s jaw seems very similar to various types of mosasaur, some aquatic reptiles which used to live in many American lakes.”

The discovery of this mysterious and gigantic creature in Bear Lake, could finally bring an explanation to almost 150 years of alleged attacks and sightings in the region.

The myth of the “Bear Lake Monster” originally grew from articles written in the 19th century by Joseph C. Rich, a Mormon colonizer in the area, purporting to report second-hand accounts of sightings of the creature.

In a 1868 article in the Deseret News, he announced that, “The Indians have a tradition concerning a strange, serpent-like creature inhabiting the waters of Bear Lake…. Now, it seems this water devil, as the Indians called it, has again made an appearance. A number of our white settlers declare they have seen it with their own eyes. This Bear Lake Monster, they now call it, is causing a great deal of excitement up here” before going on to relate several sightings of the creature in recent times.

The article created a stir in Salt Lake City and within a month “a news staff member… quizzed many Bear Lake people and found hardly a person who doubted it.”

A 1907 letter published in a Logan, Utah newspaper claimed that two men had seen the Bear Lake behemoth attack their camp and kill one of their horses. A 4-year-old also claimed to have seen it in 1937, and a boy scout leader spoke of seeing it in 1946.

In recent years the monster was mostly considered to be a tourist attraction, and the last reported sighting of the monster was in June 2002, when Bear Lake business owner, Brian Hirsch, claims to have seen the monster.