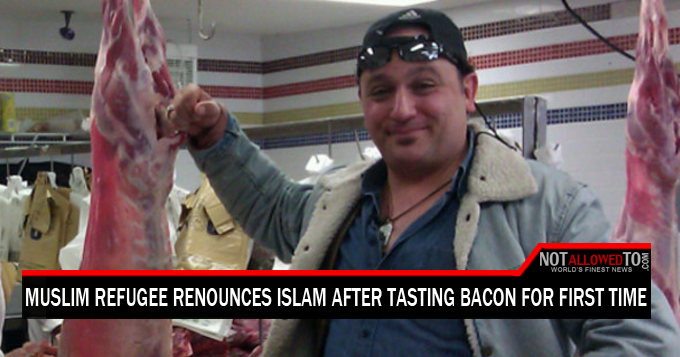 Toronto, Canada | A Muslim refugee recently immigrated to Canada has allegedly renounced Islam after tasting bacon for the first time.

Apperently, the 38-year-old Syrian man that was recently hired in a butcher shop claims he accidentally tasted bacon for the first time in his life and has never looked back since.

“It tastes like heaven!” simply puts Rahim Shaheed. “I took one bite of a club sandwich my boss prepared for me and I almost fell off my chair,” he told reporters. “The taste shocked me like an earthquake” he recalls, visibly still emotional.

The new Canadian citizen still can’t believe how a few bites off a sandwich radically changed his life.

“If there is a god, for sure he would let me eat bacon. Why would he punish all Muslims for eating bacon? It tastes so good!” he asks, visibly angered by the whole affair. “I feel cheated, I don’t understand why I have been lied to about this for so long,” he told a local radio host. “I eat it every day and feel much happier now that I have bacon in my life,” he added during the radio broadcast, although he also admits to being shunned by many members of his community. “They can’t understand, they won’t taste it and so, they will never know what they are missing” he acknowledges, visibly disheartened.

“Pork is strictly prohibited in the Quran for many reasons,” he explains. “For one, it is a filthy animal that carries and spreads many diseases to humans, but it is also the most shameless animal on the face of the earth according to scriptures,” he admits. “It is the only animal that invites its friends to have sex with its mate, that is why we find in western societies such a prevalence of decadent sexual behavior and swapping of wives between couples,” he acknowledges.

Muslims are not the only religious group to refrain from eating pork, with both Jews and some Christian denominations refraining from doing so, and the Old Testament describing pork as “unclean,” admit experts.