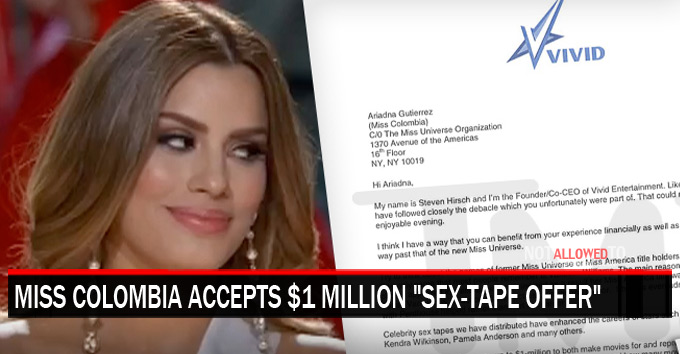 Miss Colombia was embarrassed when she was stripped of her Miss Universe crown. But now she can “benefit” from stripping off everything else. Vivid Entertainment has offered the almost-Miss Universe Ariadna Gutierrez $1 million to make a video.

In a letter they wrote, “The only name that most people remember is Vanessa Williams, the reason for her rise to fame was pics in Penthouse.”

Vivid-Entertainment, Steven Hirsch (co-founder) said, “Who made Kim Kardashian’s career and famous! Today Kim and Vanessa are famous actresses” Hirsch wrote. “They have even admitted that we have helped rather than hurting their careers.”

Being the shortest-reigning Miss Universe she could “benefit” from her experience financially while also “increasing fame way past that of the new Miss Universe.

According to reports, Miss Colombia have accepted the $1 million offer, and will pick partner for the skintillating flick. That’s not it, the company would fabricate a crown that “will be grander than anything Miss Philippines will ever wear.”

“I was able to bring happiness to my country after becoming Miss Universe for only a couple of minutes, because of that COLOMBIA and the LATIN COMMUNITY are being talked about in every corner of the world,” she said. “Your destiny is written for you. And my destiny was this.”