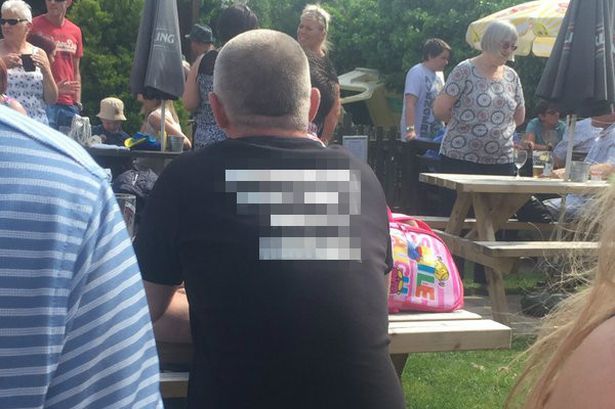 A offensive photo of a man in a beer garden wearing a vile t-shirt mocking the Hillsborough disaster and referring to those who died as pests has gone viral, sparking mass outrage.

The photo was posted on Twitter showing a middle aged man wearing the t-shirt which reads, ‘HILLSBOROUGH. Gods way of helping [a British pest control firm]’, reports the Liverpool Echo.

The photo was shot in the beer garden of the Brewers Arms, in Worcester, where the man was later thrown out and subsequently barred.

However, despite the pub making the correct decision and removing the man, who claims he was spat at and confronted while he sat in the beer garden, landlord Paul Daniels has also received numerous threats and online abuse forcing the pub to post this tweet.

The police have now, arrested a man for wearing an offensive T-shirt which allegedly mocked victims of the Hillsborough disaster.

He was arrested by officers, under Section 4a of the Public Order Act 1986, on suspicion that with intent he displayed writing which was threatening, abusive, insulting and caused harassment, alarm or distress.