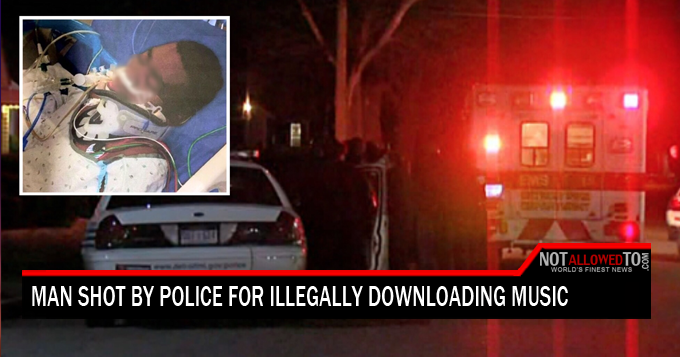 DETROIT | According to latest reports, a man was shot multiple times by police after being caught illegally downloading music.

Craig Davis, age 23, was shot by police in his home for reportedly downloading music illegally into his computer from the Internet. According to police reports, they entered Craig’s home forcibly after no one answered the door.

Police officers say they immediately heard very loud Kanye West music coming from upstairs. “We headed upstairs and the music got even louder” says Officer Dominique Cleamons, “we approached the room the music was coming from and opened the door. We witnessed Mr. Davis downloading not only illegal music, but downloading Kanye West’s “The Life Of Pablo” album illegally, he had to go”.

Officers then fired several shots at Craig, hitting him twice in the arm and once in the shoulder. Craig was then arrested and take to the closest ER room. According to nurses, is expected to live.

“How can you be evil enough to know that Kanye West is Millions of dollars in debt and yet still proceed to illegally download his new album?” says Judge Laura Playle.

Although expected to live, Craig Davis can face up to 30 years in prison for the illegal download of Kanye’s album. “Taking lethal action is the only way we can get people to stop downloading illegal music.