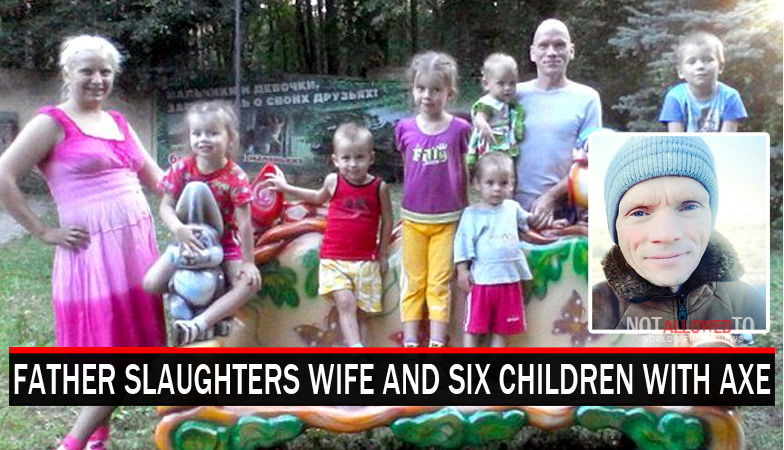 A chilling story of a Russian father who murdered his pregnant wife and six children after flying into a rage at his six year old son’s haircut.

Appearing in court, Oleg Belov, admitted to stabbing his entire family to death in a ten minute rampage before using an axe to dismember their bodies, believing it meant they would be ‘resurrected’. He told of how his wife Yulia, 32, wanted to divorce him and had cut their son Fyodor’s hair in a ‘foolish’ style.

According to the Daily Mail Belov told the court:

I tried to grab the hair clipper, and a fight broke out. I hit her twice in the jaw, she ran into the hallway and started knocking on the neighbors’ doors. I was scared that now they would definitely take away children. I took her hand and quietly brought home. I felt anger. I took my hunting knife and approached her from behind and stabbed her. I killed the children so that they would stay mine.

The 51-year-old then proceeded to kill each one of his six children, stabbing them multiple times with his knife. He then took his mother’s axe and dismembered the bodies – putting the body parts in bags and covering the flat in foam to stop the smell spreading.

He was arrested a week later when his mother-in-law Valentina Zaitseva, 69, told police she could not contact her daughter and grandchildren. The court in Nizhny Novgorod was told that Belov had been examined by psychiatrists and was ‘mentally healthy’.

If Belov is found guilty he faces life imprisonment, the trial continues.