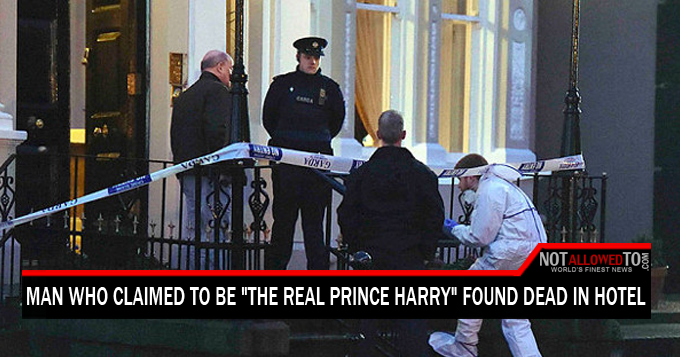 Ireland | A British man who claimed to be the “Real Prince Harry” and to have been forcibly replaced as a child by an impostor, was found dead this morning in a hotel, near the Irish Capital.

The Garda Síochána (police) was called on the site, after some neighbors complained about the strange/strong smell emanating from his room.

According to reports, the police found the body of 31-year old, James Francis Alexander, a British nobleman mostly known for his claim to be a member of the Royal British family.

The spokesman of the Irish police, Lt. Seamus O’connor said, the young man had multiple bullet wounds, suggesting that he was victim of a violent crime.

“The victim clearly didn’t commit suicide,” Lt. O’connor told local reporters. “He was attacked by more than one assailant carrying pistols. He was hit by more than 20 bullets, probably fired by silenced weapons. It’s too early to confirm anything, but this is probably the work of professionals.”

James Francis Alexander, the son of a British Lord from Lincolnshire, claimed he was in fact Prince Harry, and had been exchanged when he was 8-years old for threatening to reveal that he was not the son of Prince Charles.

Mr Alexander had attracted a lot of attention from media in 2014, when he published his book entitled “The Real Prince Harry: The truth behind the Royal lies“.

He says that he was awoken at night by his father’s butler and driven to Lincolnshire, where he was exchanged with the son of Lord Edward James Alexander, who had his age and also the particularity of looking a lot like him.

His claims had received some intense coverage for a while from the British tabloids, but then had suddenly disappeared from the media after a few days, generating rumors of cover-up among conspiracy theorists.

Indeed, despite the fact that the first 50 000 copies of his book had sold in less then a week, his publisher had surprisingly decided not to have more copies printed and it rapidly disappeared from bookstores.

The young author had then accused the Royal family of pressuring his publisher and his editor, in order to have his book taken off the shelves.

Mr Alexander fled England in January 2015 and sought asylum in Ireland, saying that he was being followed and harassed by the MI5 and that he had received multiple death threats by extremist supporters of the British monarchy.

Some sources close to the young man, told The Daily Beast that he had recently had contacts with the British embassy concerning an eventual return to England, and that he even had dinner with an attaché of the embassy at the end of the month of March, probably less than 24 hours before he was killed.

Despite these shocking coincidences, the police refuses for the moment, to link the British embassy or secret services to Mr Alexander’s death, saying that they are “following every possible lead” that could help them solve the case.