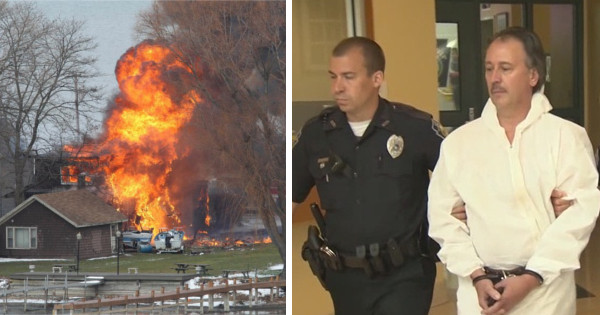 A Georgia man is facing charges of attempted murder and arson after he allegedly built a replica of the ark of the covenant and used it to burn his ex-wife’s house down.

Magdalene Maynard and her husband Josh Taylor woke up at 2 am when they heard a loud sound outside the house, similar to that of an explosion. Moments later the house was on fire.

The day before, both victims confirmed there was a confrontation with Maynard’s ex-husband, Larry Fritz, after Fritz warned the recently married couple that their union was “ungodly” and that ” the Lord would wreak vengeance upon them.”

Fritz had reportedly warned the couple multiple times that God “would strike them down” and that he would “smite those who commit adultery.”

Larry Fritz, 54, a carpenter and “Bible fanatic,” according to his ex-wife, was obsessed with building a replica of the ark of the covenant.

Fire Marshall documents says the fire was started with the use of a “large homemade capacitor-like device” and that it is believed the fire had caused the power lines to “overheat” spreading the fire to the roof.

Eyewitness testimonies report electric sparks similar to “bolts of lightning” shooting from the homemade device situated at the back of the suspect’s pick up truck.

“Then a bolt of electricity shot out of the box straight to the power lines and the whole roof caught on fire,” she explained.

During questioning at the scene Fritz told detectives that he was enacting God’s vengeance upon the “wicked and the sinners” and that those committing adultery would be smitten with a “shower of brimstone and fire from the LORD out of heaven.”

Family and friends have also reported that Fritz’s schizophrenic episodes and bipolar disorder symptoms were more intense since he had lost his job last month as a construction worker.