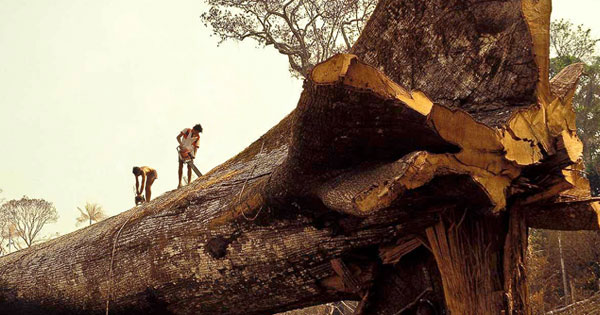 It has been reported that loggers have mistakenly cut down what experts claim is the world’s oldest tree after allegedly not noticing they were logging deeply in Matsés Indigenous Reserve, an area where logging is illegal.

The giant Samauma tree is belived to be over 5,800 years old judging on its concentric rings and estimated to be close to 40 meters in height was a major part of the native tribes cultural landscape, countless generations of natives having witnessed the long duration of the tree and having included it in their own culture.

It is the Mother spirit of the rainforest. They have destroyed Aotlcp-Awak, they have brought darkness upon not only our people, but the whole world.

Another man from the tribe said :

For generations, the mother tree has brought my people health and good fortune. The roots of the Mother tree spread throughout the rainforest and bring its life spirit to the world.

They have murdered the Mother spirit knowingly, they have done this to kill our people and take the spoils of the land; – he added, visibly shaken by the destruction of the millennia-old Samauma tree.

There are large portions of this national reserve that are rich in oil and natural gas. There has been committed action by energy corporations to lobby the government to exploit the area for years. The protected zones have been cut in half over the past decade and this is only their latest attempt to get rid of the local populations who are fighting to preserve their cultural heritage and lifestyle.

Illegal logging in the Amazon is out of control and often taking a predatory form. Governance in the timber sector is weak and open to exploitation, allowing criminals launder illegal timber as legal with official documentation. It is estimated that in Para State the largest producer and exporter of timber in Brazil, 78% of logging occurring there is illegal.

It seems, illegal logging is clearly perpetrated with the consent of local authorities and the government. If this wasn’t the case, why are local enforcement agencies not prosecuting these corporations? Why are these loggers free to keep doing what they are doing? That is the bigger question.

Between 1991 and 2014, the total area of forest lost in the Amazon has more than tripled, with most of the lost forest becoming pasture for cattle. Rainforests are the richest places on earth holding the majority of the planet’s biodiversity, yet 100 acres of rainforests are cleared every minute, estimates a recent 2015 World Resources Institute report.