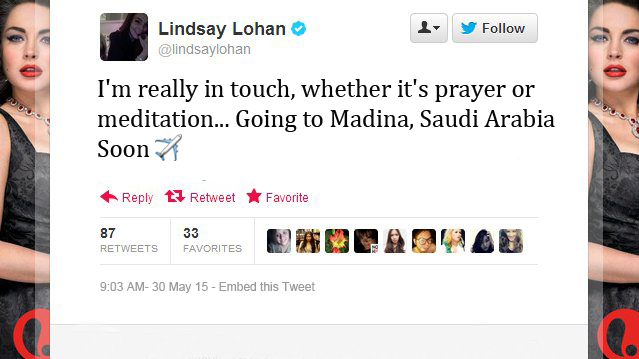 American actress, model, and singer Lindsay Lohan was spotted carrying the Holy Quran after her first day of community service in Brooklyn, New York in May 2015. Lindsay Lohan Confirms that she has embraced Islam. She tweeted this post in the morning but within a minute she deleted it.

When asked by a reporter she said:

I’m spiritual person and I’ve become more spiritual now, I’m really in touch, whether it’s prayer or meditation… there are so many powers greater than me in the world. I’ve been blessed and lucky enough to have been given a gift to share with other people. I’ve started reading the Holy Book. Islam has changed my life. I see the world in a different way after reading “QURAN”. According to her fans she just reads the Holy Book for the sake of her community service and to learn little good things in it for Muslim children.

While answering to a short question asked by the media yesterday outside the community center she said: