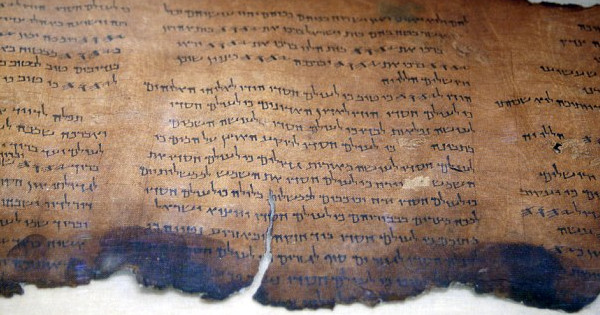 ISRAEL | In one of the earliest testimonies to the historicity of Jesus Christ, archeologists from the University of Tel Aviv have found scrolls dating back 1,800 years in caves never explored by humans before near the ancient settlement of Khirbet Qumran in the West Bank.

A research team lead by, Herman Goldstei of the University of Tel Aviv, the second-century-old document reveals new insights into the Gospel of John, explaining the life style of the prophet in a new light.

“These Aramaic scrolls, the language spoken by Jesus and his contemporaries, give great details and insight into the celebrations that occurred during the wedding where Jesus turns water into wine” he acknowledges.

“Although previously found versions of the Gospel of John reveal similar traits of the story, these passages seem to emphasize the fact that Jesus heavily indulged in the festivities, being called a ‘drunkard’ and being described as ‘mating’ with the men and women of the celebration” he adds, visibly fascinated.

” … and Jesus mated (translated from the Aramaic term Hashem: to mate, to copulate) wildly with the men and women that had assembled to listen to him… “

The research team’s discovery could definitely change our modern view of the prophet of the New Testament, warns theologian and biblical scholar, Adam Waits of the University of Connecticut.

“Although I was of the first to repudiate the findings of this discovery, I have come to acknowledge the troubling implications this authentic document will unleash upon peoples of the Christian faith around the globe” he told local reporters.

“The troubling similarities between the pagan practices of orgy-like SexCelebrations of the god Bacchus, the heavy drinking of wine, the animal sacrifices and blood-offerings of the wedding where Jesus turned the water into wine clearly indicate that Jesus did in fact partake in these celebrations and was a devout follower of Shabaz, the Middle Eastern version of the pagan god Bacchus of the Romans,” he admits.

Similar versions of the celebration of the wedding described in the Gospel of John had previously been discredited by the Vatican as fraudulent documents “attempting to defame the heavenly character of  the prophet of the New Testament and of the Christian faith”, but this recent finding could give credence to the once demonized scrolls believe experts.