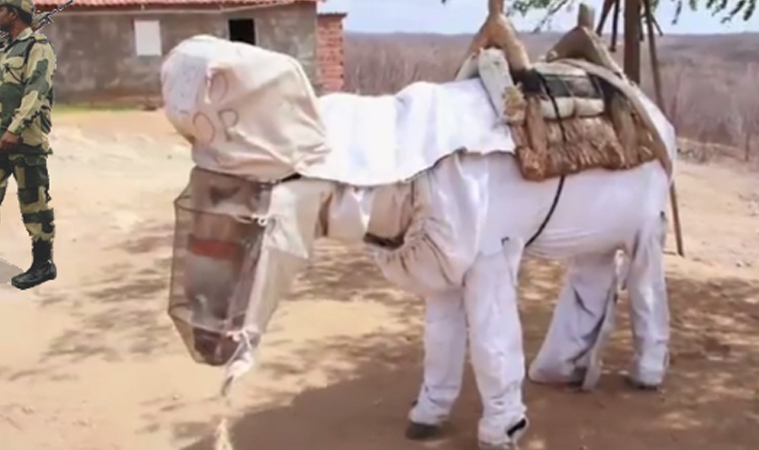 INDIA | The Indian Border Security Force (BSF) has arrested a donkey allegedly working for the Pakistani secret services while it was attempting to cross the border to enter Indian Kashmir.

BSF Director General KK Sharma met the media this morning to announce that border guards had captured a donkey who is believed to have been used by the Pakistani Inter-Services Intelligence (ISI) to smuggle communication equipment.

“The donkey was “filled” with hi-tech radio and encrypting equipment meant to be recuperated by an ISI agent in India. Our agents have detected that the animal had some metal in its digestive system, which made them suspicious.”- said BSF Director General

General Sharma says the donkey will undergo a surgery to remove the unidentified metallic objects from his stomach.

The animal was covered by an odd-looking “radio-jamming” suit to prevent any possible electronic equipment inside the animal for transmitting or receiving any types of commands or pieces of information.

The news and the arrest once again sparked tensions between india and Pakistan, as the Pakistani government vehemently denied having anything to do with the arrested donkey.

According to Mr. Hamza Sahreef, spokesperson of the Pakistani Ministry of Foreign Affairs, Indian authorities are “completely paranoid”.

“They have been shooting birds and wild animals that cross the border for many years. They just capture innocent animals and blame it being a Pakistani SPY, as if we were desperate enough to hire animals as spies.”

Mr. Hamza says the Indian authorities’ accusations are insulting meant to “provoke Pakistan and destabilize the peace in region”.

An increased number of soldiers and border agents was already present today on both sides of the borders, and the animals who attempted to cross were submitted to an array of scans inspections.

It isn’t uncommon for indian army and serurity services to arrested animals at the Indo-Pakistani border.

Last year, Indian police seized 237 pigeons on suspicion that they were being used for espionage by Pakistan. They were check for any spy devices or hidden chip.

Most of them were X-rayed to check for any spy camera, spy devices, transmitter, drugs or hidden micro chip. Most of these animals turn out to be innocent, but a few have turned out to be extremely suspicious.

A pigeon captured last year had a message attached to one of its leg threatening the Indian prime minister.

Despite the constant Indian accusations, none of these animals were ever proven to have had any links to the Pakistani government or secret services.