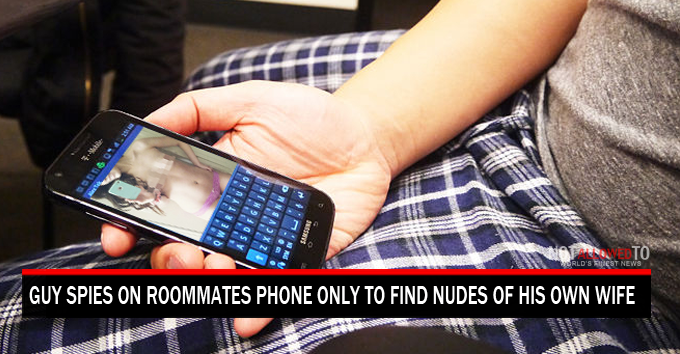 This guy is living a nightmare right now. There should be no reason why his roommate has the photos. A user has posted his shocking discovery on Reddit.

Here is the story….

This happened today, about 10 mins ago, I came here to post because Im not sure what to do.

Its my day off and my friend got kicked out of his house about a month ago by his girlfriend, as far as I know he did nothing wrong. He’s been sleeping in a hotel and my wife and I offered to let him stay at our apartment for a few weeks until he can find a place of his own. Anyway we are sitting on the couch and he runs out of beer and gets up to go to my kitchen to get another. He puts his phone face down on the couch. I shouldn’t have but I picked it up to look at it.

He was looking at a picture of my wife… nak*ed. I got really uncomfortable at the thought that he’s browsing his phone looking at a pic of my f*****g wife right f*****g next to me.

I quickly put down the phone where he had it and I locked the screen to be safe. When he came back I went to my bedroom to type this. Guys what do I do.

People were telling him he needed to just relax and try getting the phone back in a non shady way. Others were offering this kind of advice:

Punch him in the face hard and fast. Don’t stop till the cops show up. Then find a new wife.

Poor guy is just living in a nightmare. Was his wife sending his buddy some private selfies? Or is his buddy a creep sneaking pics of his wife. Either way, sucks to be him.