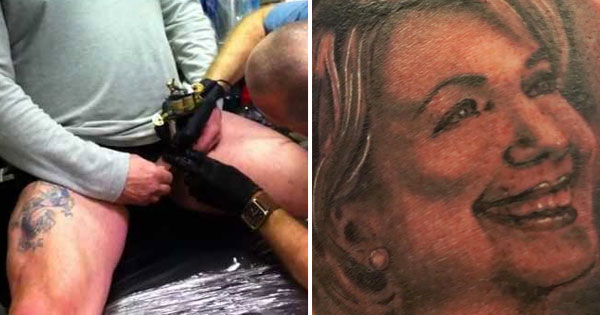 Dallas, Texas | A supporter of Hillary Clinton has tattoo the face of the Democratic president hopeful on one of his testicles.

The 44-year-old die heart supporter, claims his tattoo is a “pure act of love and devotion” towards the Hillary.

“I love her so very much, she is such a great woman and an inspiration to all Americans,” he told local reporters.

“I tattooed her face on my balls because I want my future child to have a little of Hillary in him or her” he admits, visibly emotional

James published pictures of the painful tattooing session on his Facebook account hoping to show others how much “Americans are ready to sacrifice” for the cause and to make sure Donald Trump doesn’t end up in the Oval Office.