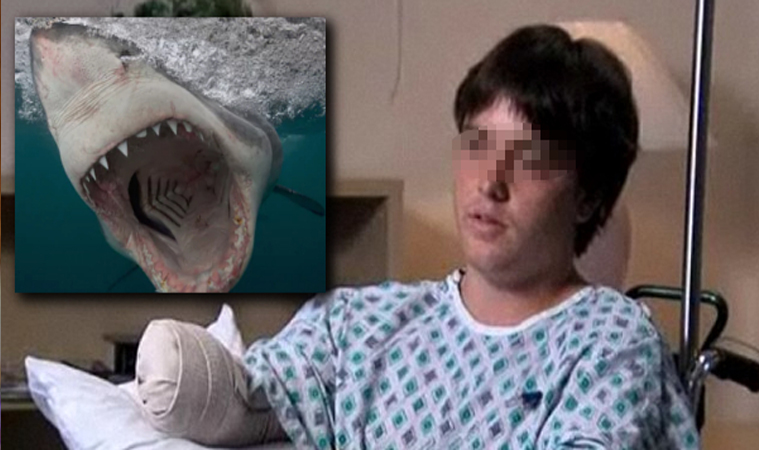 An environmental activist was almost killed yesterday in the Indian Ocean after the great white shark he was trying to hug suddenly attacked him and bit his arm off.

21-year old Darrell Waterford, was participating in a promotional video for Greenpeace, some 100 nautical miles away from the Australian city of Perth.

Along with four other members of the organization, Mr. Waterford decided to dive with some great white sharks in order to improve the marine predator’s public image and raise awareness about shark hunting.

The group shot some incredible footage during the first 30 minutes as they swam with a group of sharks caressing and even hugging the large animals.

Unfortunately for the young American, one of the sharks suddenly became aggressive after being hugged and suddenly attacked him. It attacked Mr. Waterford and tore off his right arm right below the elbow. The young man lost a large amount of blood, but was able to get out of the water and was rapidly taken to the hospital.

Huei Li Chong, the leader of the expedition, described the violent attack in an interview with the Australian Broadcasting Corporation.

“The shark seemed really friendly at first, but then it went totally berserk. It charged Darrell and bit off his hand in an instant, so we all hurried out of the water before it killed us.”

According to him, the shark might have turned aggressive after smelling blood in the water.

“Sharks can be affectionate an cuddly when they’re calm, but the smell of blood activates their predator instincts. It’s not their fault, and we shouldn’t hold them responsible.”

Greenpeace has been campaigning for years against shark finning, which consists of the removal of fins from sharks, often while the shark is alive.

Despite the organization’s efforts, finning has increased dramatically since 1997 largely due to the increasing demand for shark fins for shark fin soup and traditional cures.

Greenpeace has been trying for years to improve the white shark’s image in order to obtain an international ban, similar to the international treaty that applies to commercial whaling.

Several members of the organization now fear that this incident will compromise their campaign to restore the white shark’s image as a peaceful marine creature.