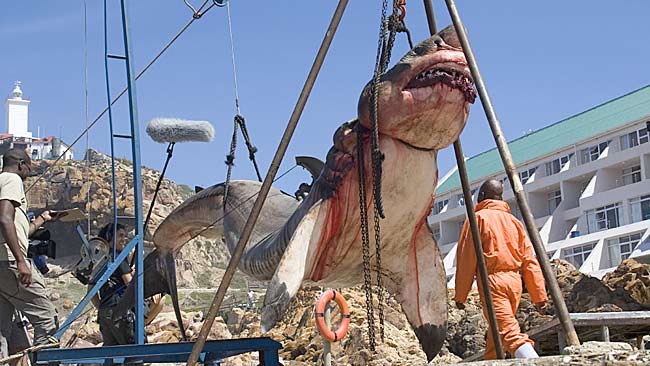 A giant prehistoric shark previously thought to be extinct has been captured by local fishermen this morning off the coast of Australia.

According to report, the giant creature first thought to be a great white shark was rapidly declared by experts to be an unknown species of shark as it’s great weight and size were unheard of. Analysis of the teeth suggest the shark to be a parent of the Megalodon, an extinct species of shark that lived approximately 28 to 1.5 million years ago, during the Cenozoic Era.

The creature that measures 10.3 meters and weighs an astounding 15.2 tons is the largest living shark ever caught to date, great white sharks reaching an impressive 7 tons at full growth, a size that is no match for this giant prehistoric shark that can reach an imposing 20 meters in length and possibly weight up to 30 tons, depending on estimates.

“This is an amazing and incredible opportunity to work on a real specimen instead of trying to figure out the whole picture from different fossil composites” admits Smithsonian paleontologist Jeff Mayor.

The giant was revealed not to be fully grown and is estimated to be 2 or 3 years old and already twice the size of a full grown white shark, which takes 5 years to reach its full growth.

Autopsy revealed the creature lives under great depths, feeding on squid and other fish not commonly found near the surface, which makes the discovery even more incredible to experts.

“Are rising sea temperatures and global warming forcing these beasts to come up closer to the shores or was this animal simply hurt and suffering from a disorienting handicap, these questions are left unanswered” claims local marine biologist David Bishoff.

The discovery has raised great enthusiasm from experts abroad who are pondering the fact that other thought to be extinct species might still be dwelling in the depths of the seas.