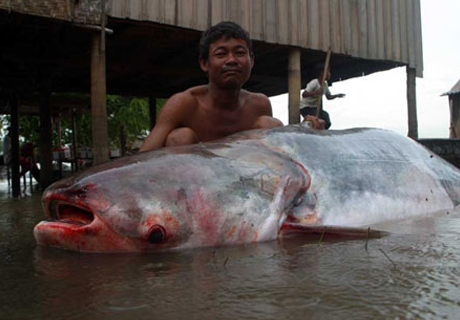 A giant man-eating catfish that has been terrorizing villagers of a region at the border of Burma and Thailand has finally been caught in the Mekong river and what researchers found in it’s stomach will horrify you.

The giant that was caught by local Khmu tribe fishermen of the local Laotian village of Luang Pang near the convergence of the borders of Burma and Thailand, revealed to have within it’s stomach the human bone fragments of what experts have estimated to be between 10 and 20 people, children for the most part.

“The beast weighted around 600 pounds or next to 300 kilos since it’s head, tail and fins had been chopped off by local villagers before biologists were aware of the catch and could examine the body” explains biologist Kalaina Maona, from the National University of Laos’s Natural Science Department.

Dozens of children and a handful of elderly people have been reported missing in the past ten years from the local area, leading some local authorities to claim the beast was behind the wave of disappearances.

Rumors of a giant river monster capturing villagers were common amongst elder villagers but thought to be folklore, until recently, by local law enforcement.

“Legends of river creatures preying on local tribesmen have been part of Khmu culture for centuries” explains anthropologist Mary Stewart Hedger from McGill University in Montreal. “This terrible incident somewhat proves these folktales had some dramatic and traumatizing truth behind their origin” she adds.