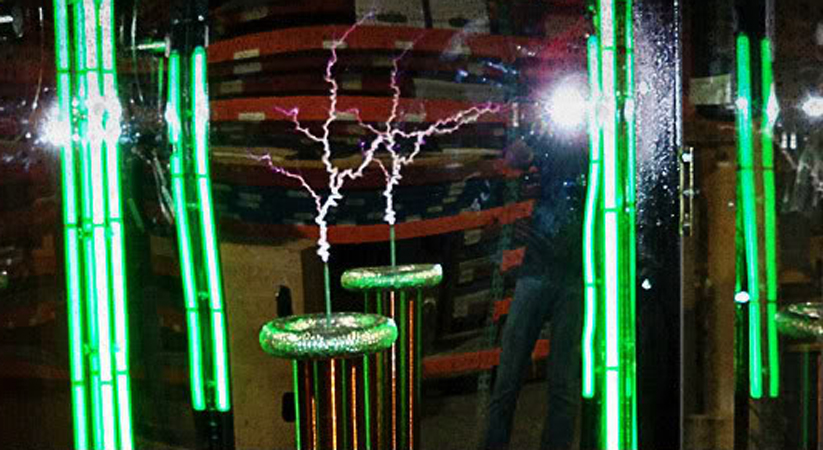 A Paranormal investigator/Ghost hunter claims he captured a ghost, and is currently detaining it in a electromagnetic containment chamber.

Robert Bess claims he captured a ghostly spirit during an investigation in a factory, on September 16, using a device that he calls a “Parabot Contaiment Chamber”.

“With Parabot we went to the second floor of the asylum, where the sightings and noises had been reported,” said M. Bess. “Everything seemed normal until the next morning, when I powered up the Parabot and it began spinning violently and pivoting at a high rate of speed.”

“We were in serious trouble, We expected ghosts, but we weren’t prepared for a poltergeist of that magnitude. An eerie white shape appeared, and began screaming. It started throwing objects at me and at the two techs and the engineer who were with me. It tipped over some furniture and broke a lot of stuff, but after about a minute, it was finally absorbed by the Parabot and everything started to calm down.”

Robert Bess has a degree in Physical Engineering from Memphis State University, and has been applying the theories and experiments of Nikola Tesla to the science of detecting paranormal phenomena.

Mr. Bess has built what he calls a “Parabot Containment Chamber” which is claimed to catch and hold ghosts of any type. Mr. Bess theorizes that ghosts are simply electromagnetic fields of energy that appear in our plane, though often undetectable due to cycling at a very low rate.

His Plexiglass ghost containment chamber is 8′ by 4′ in size, sitting upon a platform of wheels that can be remote controlled to move about a room. To catch a ghost, the electrical monster contains magnetic locks, lasers and what looks to be a Tesla coil used to not only attract but grasp hold of unsuspecting entities.

Bess claims to have already captured all sorts of entities with his Parabot, including the fully formed, clearly visible spirit of a schoolteacher from the 1920s.

“Its a strong poltergeist to be able to survive such a long time Parabot contaiment” says Mr. Bess. “It has refused to communicate with me for the moment, but I am convinced that it understands me. It certainly has some form of intelligence, but it also looks very aggressive.”

Bess says he also wants to demonstrate how to capture and contain real ghosts and explain the technology behind it so it will be understandable to the public.