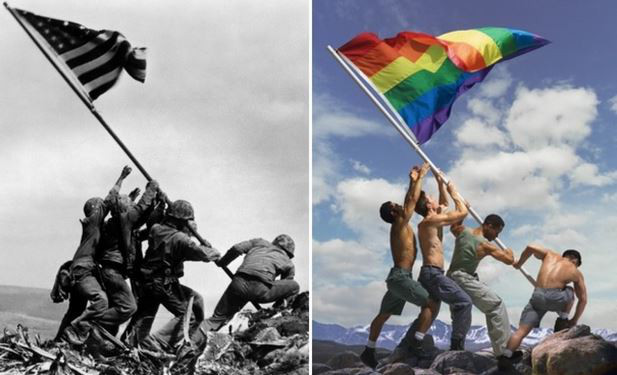 The Battle of Iwo Jima was a pivotal battle in World War II when U.S. Marines won the weeks-long assault to capture the strategically key spot in the Pacific island archipelago. Almost 6,000 Marines and Navy corpsmen died and 17,000 were wounded. The victory was sealed with the iconic raising of the American flag on Mt. Suribachi.

People are celebrating by sharing photo on social media with amazing titles as: “Love is beautiful“,”PROUD to be an American Gay“,”Gay Love Won“,”#LoveWins“…

But many people have different opinions and reactions to the photo and says photo comparing gay marriage victory to Iwo Jima beyond disrespectful.

“Now… I have nothing against people who are into same s*x partnerships. However what I do have a problem with is this F**KING picture. How dare you compare your political struggle to what the Marines & Navy Corpsman went through on Iwo Jima. I get the whole meaning of you winning the “Uphill Battle” but this is tasteless, offensive, and disrespectful to those who gave their lives on that hill. You should be ashamed of yourselves for being hypocritical of those you claim offend your flag.”

Currently the picture has been shared for more than 25,000 times on Facebook by Gays and LGBT members. (The numbers are still growing)


But, of course, not every one have the same opinion… One of the LGBT member Alec Steiner, 21 said…

How is this disrespectful… Someone explain to me right now. Is it disrespectful because their gay? Because they could never compare to the soldiers? Hey a**holes if you dont like the picture then dont look at it.

Because those soldiers went through some sh*t But don’t forget that gay people have been beaten, abused, mistreated and often killed for being gay. Their struggle is very much the same.