Chinese fishermen were shocked when they caught a bizarre creature that looked like a cross between a dolphin and a crocodile.

According to reports, the ‘Crocodolphin’ was caught in waters just off Zhoushan, a town in the Zhejiang Province of China, reports The Telegraph.

Fishermen were stunned as none of them had ever seen anything like the strange creature before. However, before we get too excited.. Its not ‘Crocodolphin’. 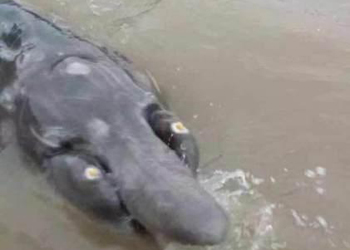 According to experts it is actually a type of ‘beaked whale’ which are very rarely seen as they are among the deepest diving whales. They spend the majority of their time hanging out close to the ocean floor.