The billionaire Sinaloa Cartel boss paid off prison guards more than $50 million and escaped from the maximum security Altiplano prison by disappearing down a hole in the shower of his cell and through a mile-long tunnel dug underneath the prison.

NOW, The Mexican kingpin is taunts the federal police – tweeting: ‘It could be that something that has only happened once will never be repeated. But anything that happens twice, will certainly occur a third time.’

At the time of Joaquin ‘El Chapo’ Guzman’s arrest he had more than $500,000 in cash and was wearing dirty tank tops which many believes to be a $50,000 Yeezy brand tank top. El Chapo and his crew had this arsenal at hand, including a rocket launcher and his right-hand man ‘El Cholo’, a hitman. 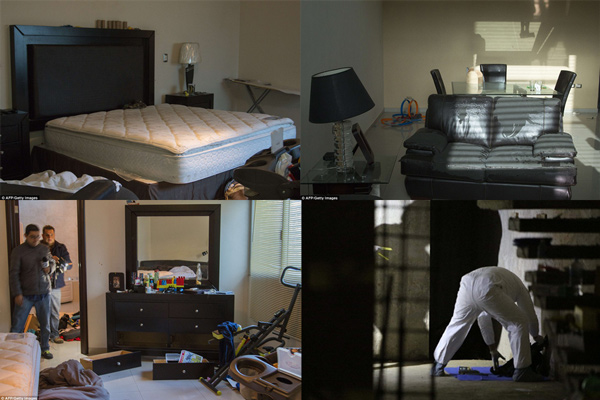 Mexican authorities are willing to extradite the recaptured drug lord to United States of America. If the extradition goes ahead, it is likely El Chapo will spent the rest of his life in jail without the possibility of parole. According to sources it appears that El Chapo’s wants to make a real movie on his life as a drug lord and escapes from the prisons, he began the process of making a biopic, similar to that of Netflix’s popular Narcos show on the life of infamous Colombian drug lord Pablo Escobar, which tipped off authorities to his whereabouts.

El Chapo, which means ‘the short one’ in Spanish, had even contacted producers and actresses through intermediaries to tell his ‘rags to riches’ story, which was what finally helped police track him down. The names of the stars he approached have not yet been confirmed.