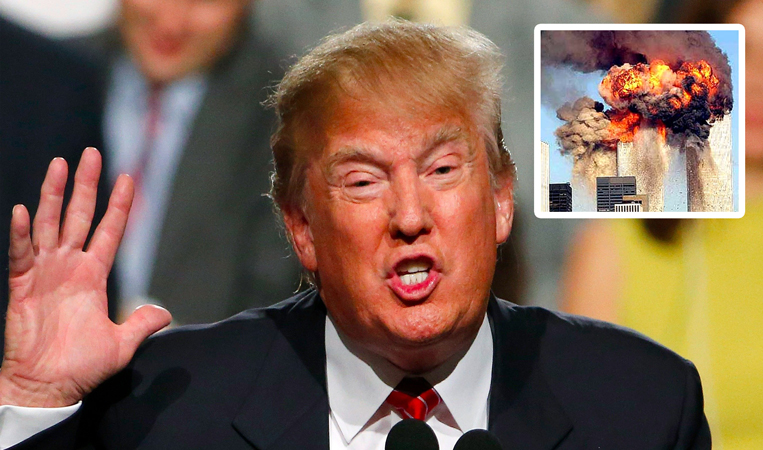 Donald Trump says: “Americans deserve answers and I would definitely reopen 9/11 investigation so that this horrible tragedy never happens again”.

Pressed on the subject of the September 11, 2001 terrorist attacks and what he would do to prevent such a thing from happening again, the presidential candidate took his supporters by surprise.

“The original 9/11 investigation is a total mess and has to be reopened. How do two planes take out three buildings in the same day? I never got my head around the fact that nothing is mentioned about the destruction of Building 7 in the 585 page document” he explained, talking about World Trade Center 7 which also collapsed during the September 11 attacks.

“Why did the administration at the time not take legal means against Saudi Arabia? Weren’t 19 of the high-jackers from Saudi Arabia?” he asked aloud. “Americans deserve answers and I would definitely request a new investigation so that this horrible tragedy never happens again” he told the crowd under a thunder of applause.

Donald Trump has received public support on this issue from a number of public personalities who also demand that the 9/11 Commission Report be revisited.

“For years I have been campaigning for the release of the 2002 Joint Congressional Intelligence Committee 9/11 Inquiry’s report, to no avail” explains the former Governor of Florida. “These missing pages point to the direct involvement of the government of Saudi Arabia. Why are these being kept secret? If the American public knew what was in these documents, there would be a revolution tomorrow in the streets of America. Americans deserve to know the truth” he concluded, visibly angered by the whole affair.

Since 2002, the release of a number of 9/11 Commission Report documents is hindered because they are congressional records, hence they are exempt from the Freedom of Information Act (FOIA).