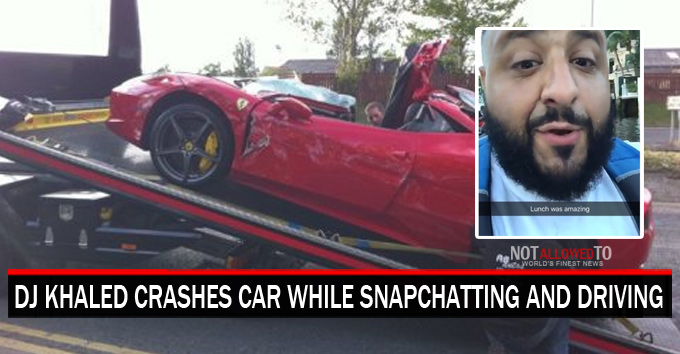 MIAMI – According to sources, the rap producer DJ Khaled has been involved in a car accident today, after he was reportedly Snapchatting while driving.

DJ Khaled has been referred to as the most positive man of 2015 for his humorous and inspirational Snapchat updates, and the teaching his followers his various “keys to success”, which include: Swimming in saltwater, eating Cinnamon Toast Crunch cereal with Almond Milk, Having many pillows, and the most recent, getting into car crashes.

According to reporters at the car crash site, DJ Khaled was being taken away in a stretcher by EMT’s when he reportedly asked for a reporters microphone and said “Car crashes are keys to success too. They don’t want you to crash. A lot of people can’t handle car crashes but… I CAN”.

The collision was severe, according to authorities, as DJ Khaled’s Ferrari 458 Italia was badly damaged. Although the collision was severe, DJ Khaled seems to have suffered mostly minor injuries, including cuts, bruises, and a minor fracture. The other driver who collided with DJ Khaled also appears to be in fair condition with only minor injuries. Both victims are expected to be fully healed in just a few days.