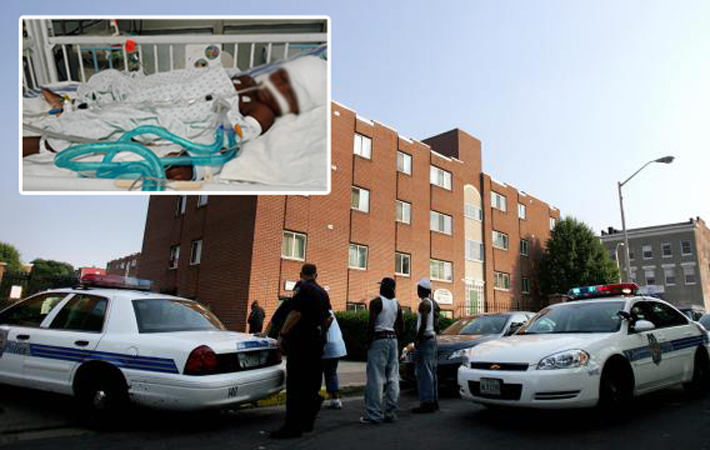 BALTIMORE – A 2-year-old Malik Gibson was shot by police officer Greg Browning after Browning mistook the pacifier in Gibson’s hand for a handgun.

According to Mr. Browning :

“I was called to the building for a domestic disturbance. When I got there, the adjacent apartment had their door open. There was a black male sitting on the floor. He said something to me in a hostile manner. Something like, ‘go away!’ I could tell that he was going to be aggressive. When I saw him reach for the object, I knew it was going to be him or me. My kind is Not welcomed in these kind of neighborhoods.”

The object in question turned out to be Gibson’s pacifier and the door had been opened because the apartment’s superintendent had not yet fixed the apartment’s air conditioner so Gibson’s mother was letting a cool breeze in. She was on the phone watching Gibson from the kitchen. She apparently couldn’t see who he was talking to, but stated that, “if she had known it was the police, she would have closed her door immediately and took her child to sit in the bathtub with her until everything settled down.”

Black activist Cornell Burns stated, “Why hadn’t the police officer used his sirens to alert black people that there were police nearby? How can black people shut their doors and blinds when the police don’t alert them that they’re coming into the neighborhood? That’s why this young black male is now dead.