DON’T ever do your illicit deeds at your lover’s home. This guy probably know this by now, after he was caught red-handed by the husband of a married woman whom he was having an affair.

Apparently, the husband came home unexpectedly, somehow the smart lover was quick enough to find his way out but left his shirt. And the drama begins…

In the video, the unlucky husband and his cheating wife can be seen arguing on a balcony of a third-floor apartment. The husband angrily shouted ‘Whose shirt is this?’ But the wife just threw the shirt below where the crowd has already gathered watching the soap opera like scene.

However, the main attraction isn’t the arguing couple, but the lover who suddenly came out of the couple’s third story window. In a desperate attempt to escape, the lover managed to make a rope out of knotted blankets and bravely climbed down. 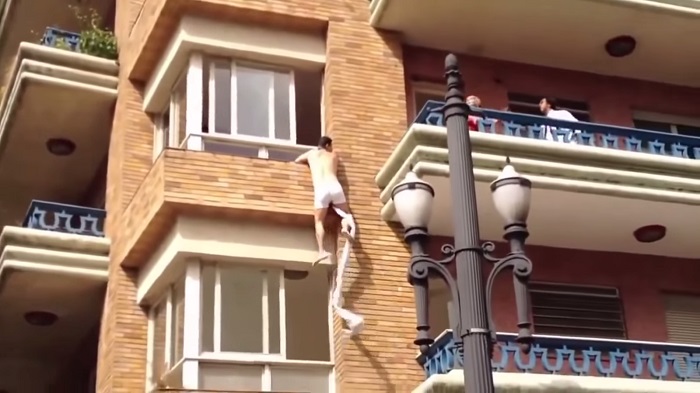 The husband noticed the fleeing guy in boxer shorts. Which pretty much explains what they were doing before the husband arrived. The scene attracted a many people who laughed by what they witnessed, and mocked both the guy and the unfaithful woman’s husband. They shouted ‘Cornudo,’ a Portuguese word for a man being cheated on.

Later on, an emergency rescue team arrived to help the struggling man get to the ground, by placing a safety cushion on the street. The crowd dared him to jump and he did! The shirtless man safely landed on the soft cushion and the crowd cheers as he fled the scene, barefooted.