Charlie Charlie Challenge – A Dangerous Game of Conjuring A Demon

A new dangerous challenge which has gone viral on internet is said to conjure a Mexican Demon and left many people injured and possessed by Demon.

To attempt this challenge you need two pencils and a paper.

(WE DO NOT ADVISE TO DO THIS CHALLENGE, DO NOT SUMMON SPIRITS/DEMONS) Lay two pencils on a piece of paper in the form of a cross and writing “YES” and “NO” in four boxes formed by the cross.

The  ask a question, “Charlie, Charlie, are you here?” If the pencil rolls towards yes, YOU GOT THE DEMON.
You can erase “Yes” and “No” from the paper and write the question you want the demon to answer.

When this happens mostly people are too scared and run out; leaving the demon there. And its believed is the reason the demon gets angry and hurts people. If you are going to call a demon you need to send him back too.

Most people who attempt this challenge only read about how to get the demon but they DO NOT read about how to send him back, or let off the hook. If you attempt the challenge and are successful without getting scared, you can ask him question which no one else could ever answer. Like are you going to PASS you exams or are you going to get a JOB soon etc.. Once you are done, you need to let the demon of the hook (the pencils). To let off the demon you need to say ““Charlie, Charlie, you can go!”  and remove the pencils one by one.

This viral challenge has been done by thousands of people to test the reality, many gets scared while some have been physically attacked by demons who DO NOT let the demon of the hook and be over smart.

George Allan, 22, reports that he was attacked by Charlie the demon after he taunted the spirit saying, “You’re not real, you’re a fake, come get me if you are who you say you are! Show me you’re here!”

He continued, “As soon i said that, i felt as if there is someone or something is around me. A very strange feeling. My body felt like someone is sitting my chest and then suddenly i was picked up and violently thrown face-down. I felt like somebody was slicing me with razor blades. I started screaming, and then my friends who were downstairs came up, and then everything stopped”.

When my friends removed my shirt the were shocked to see the scratches and marks on my back. 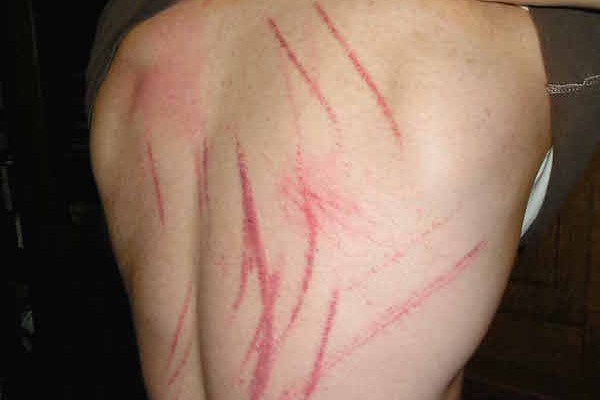 This is not a game, this is serious stuff! Do not attempt this game unless you are ready to play with the devil himself.

A video has been recently posted claiming that this women”Nancy,25″ was spotted in a random neighborhood acting strange after doing the #CharlieCharlieChallenge. One of her close friend believes that she was possessed with demon after she did the Charlie Charlie Challenge.

There has been many strange stories by many people who did this dangerous challenge of conjuring a demon. THIS IS NOT A GAME.

READ : Girls Claim Charlie Demon Raped And Beat Them For Doing The CharlieCharlieChallenge