Boat Capsizes after Russian Submarine Got Caught in its Fishing Net 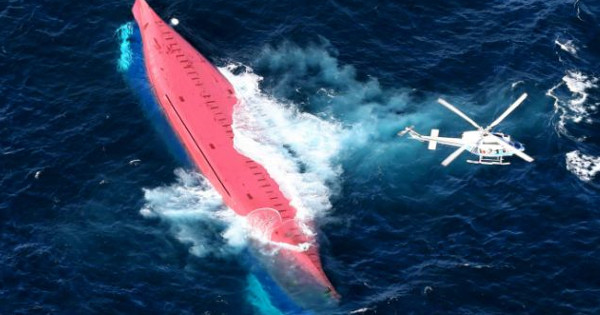 TURKEY | 11 fishermen were rescued and 6 others are missing after a Russian submarine got caught in ship’s fishing net, causing the boat to sink.

According to report, the fishing boat named Deniz Hazine, left the dock early this morning with 17 men on board, setting out to fish. Unfortunately in less than 15 minutes after they made an dangerous and unusual catch of Russia’s diesel-electric submarine Rostov-on-Don, the boat Capsizes.

Apparently, after the sub snagged in its fishing nets, the ship was dragged on over almost 5 kilometres before finally being pulled underwater.

Most crew members were overboard before the ship capsized, but 6 of the men were still on board went the ship went down, and have yet to be found.

The captain of the ship, Faruk Öztürk, said that he felt like boat and was being pushed by an invisible hand.

“I noticed that something was wrong, but it was already too late,” Mr. Öztürk told reporters. “I’ve had whales getting caught in the nets before, but this was very different. It made our ship rotate and it began pulling us. Most of the crew panicked and jumped overboard, so it was impossible to release the nets in time to save the ship. After about a minute, I realized that there was nothing that I could do and I jumped in the water, only moments before the ship capsized.”

Helicopters and aircraft of the Turkish Navy along with a team of specialized divers are involved in the search for the six fishermen who remain missing.

The Russian Defense Minister presented his condolences to the victims and their families.

“The Russian Navy has confirmed that one of its submarines accidentally got caught in the ship’s nets.” said Mr. Shoygu. “We would like to express our sympathy to the victims and their families.”

The incident risks reigniting tensions between the two nations, as both countries have continued to trade sharp rhetoric in recent months, after the downing of a Russian military jet by Turkish F16s in November 2015.

In December, another incident occurred involving a Russian military ship and a Turkish fishing vessel near the Greek island of Limnos, in the Aegean Sea. The warship Smetlivy fired warning shots at a Turkish vessel, an action that had been meant to avoid a collision, according to the Russian ministry of Defence.