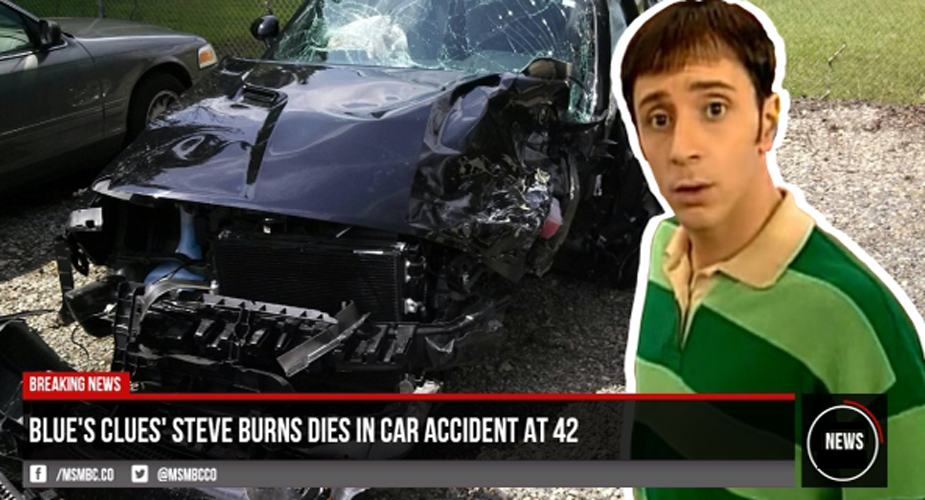 PENNSYLVANIA – Steve Burns, 42, was killed in a one-car crash. Burns was pronounced dead at 7:11 p.m. at The Reading Hospital and Medical Center in Reading, Berks County Coroner Randall Wiseman told The Associated Press.

Burns, best known as the original host of the long-running children’s television program Blue’s Clues, suffered severe head trauma and internal injuries after he wrecked a 2014 Dodge Challenger near the community of Shillington.

Pennsylvania Highway Patrol responded to the crash after receiving a 911 call of a vehicle that had overturned on the roadway. The caller, who was traveling behind Burns at the time of the accident, indicated to the 911 operator that he had seen deer on the roadway just before the accident occurred, which police believe may have been a major factor.

Police do not believe drugs or alcohol were a factor in the wreck and the cause is under investigation.

Burns was nominated for a Daytime Emmy and received numerous awards for his starring role on the popular children’s television show.

“Our thoughts and prayers are with his family,” says a spokesperson for Nickelodeon. “This is obviously a tragedy. We’re shocked and saddened by this news. Steve was a positive role model to millions of children who invited him into their homes everyday. His passing is a great loss to countless fans and to all of us here.”

After seven years and nearly 100 shows, Burns departed Blue’s Clues in 2002 to pursue his music career.