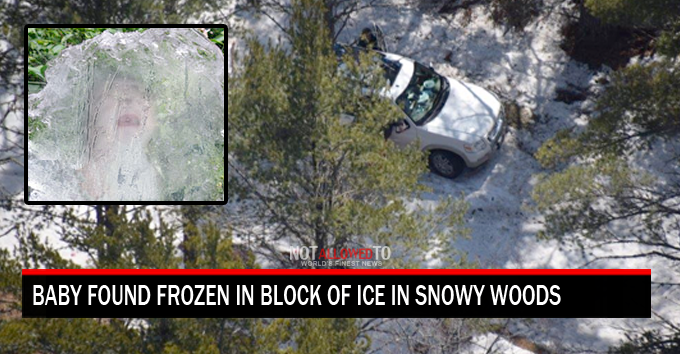 Jackson, Tennessee – Authorities are investigation after hunter found a gruesome body of a baby in the snowy woods on Wednesday while he was setting squirrel traps.

28-year-old Mr. Alvin Lee, was tracking through the forest on squirrel hunt when he discovered a large Ice-Block with something very strange inside. As he got closer, Lee said he could not believe what it was.

“At first, I thought it was a doll,” said Lee. “But when I got closer, I realized it was a darn baby. I mean, how the can someone do that to a child and how it got all the way out here? I believe someone dumped the poor kid.”

According to initial investigation police could not find any other tracks besides Lee’s that led to the location where the baby was found.

Police also found the baby still had his umbilical cord attached, and believe that mother abandoned the baby right after it was born.

They are currently waiting to autopsy results to reveal whether the child was stillborn or left in the woods alive to freeze.