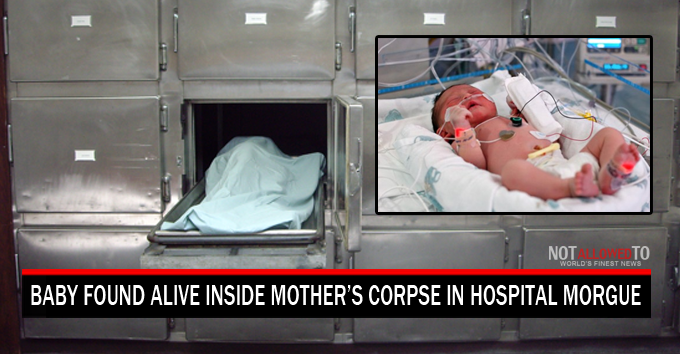 Reportedly, a young pregnant mother, Shelley Winston, was driving down an icy Boston, Massachusetts road last night. Tragically, her car slid off of the highway and was mangled in the wreckage.

Winston and her 32 week unborn baby were pronounced dead by emergency medical technicians (EMT) at the scene, and was transported to the hospital morgue for autopsy.

Pathologist Robin Mills described the shocking moment right before the autopsy: “I removed the subject from the drawer and, what I saw made me gasp,” said medical examiner Mills. “I looked inside the drawer as I reached to pull her out, and I saw movement underneath the sheet covering the corpse. At first, I was terrified by the movement! It was the baby kicking in her stomach! As if it was trying to escape. I immediately cut open her stomach in a C-section type delivery. The baby was miraculously alive or as documented ‘back from the dead’. Its a miracle!”

The baby girl was immediately transported to the Intensive Care Unit (ICU) where she is listed in critical condition. Doctors at the hospital that initially confirmed the death of a mother and fetus say they cannot explain how the baby could possibly be alive. However, they hope that Winston’s autopsy and further examination of the infant will give them more clues to what may have caused this to happen.