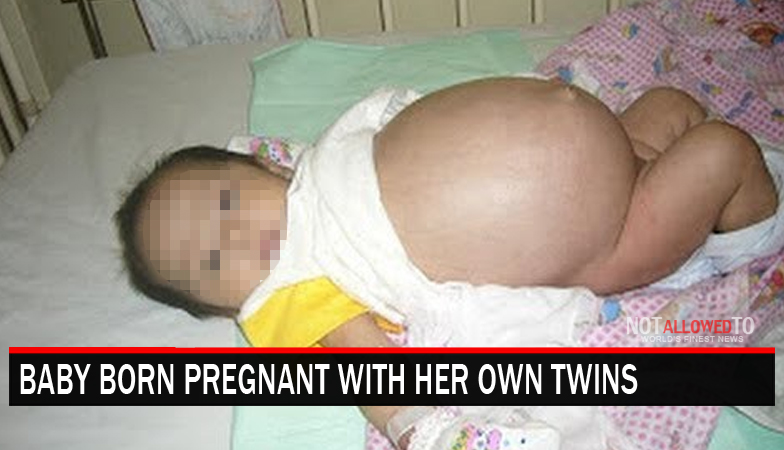 HONG KONG – A baby was pregnant with her own siblings at the time of her birth, according to a new report of the infant’s case. The baby’s condition, known as fetus-in-fetu, is incredibly rare, occurring in only about 1 in every 500,000 births.

“Weird things happen early, early in the pregnancy that we just don’t understand,” said Dr. Draion Burch, an obstetrician and gynecologist “This is one of those medical mysteries.”

The World Health Organization (WHO) considers a tiny fetus found within an infant to be a kind of teratoma, or tumor, rather than a normally developing fetus. But the doctors who treated the baby girl wrote that rather than a teratoma, the tiny fetuses may instead be the remains of sibling twins that were absorbed during the pregnancy.

The baby was suspected to have a tumor, but it was unclear to the doctors exactly what the mass was. During surgery, the surgeons discovered two fetuses between her liver and her kidney. One fetus weighed (9.3 grams) and the other (14.2 grams) — corresponding to about 8 and 10 weeks’ gestation, the case report said. Each of the babies had an umbilical cord that linked to a placenta-like mass in the girl’s belly.

The baby girl was obviously too young to have conceived the fetuses herself. Instead, it’s likely that the girl was once one of triplets, the researchers said.

Then, for some mysterious reason, the two smaller fetuses were absorbed into the body of the remaining child. However, their development couldn’t proceed normally, the doctor said. “They need placental flow and all that other stuff to really grow.”

Fetus-in-fetu may, in fact, be similar to a surprisingly common phenomenon: vanishing twin syndrome. In many twin pregnancies, one of the twins is completely absorbed and “vanishes” into the body of the other. “When you do a delivery and you see an extra placenta and a cord, you say, ‘Oh, it must have been a twin,’” the doctor said.

Fetus-in-fetu has been reported in about 200 cases in the medical literature. In rare instances, fetuses that die in utero can become calcified and turn into stone.