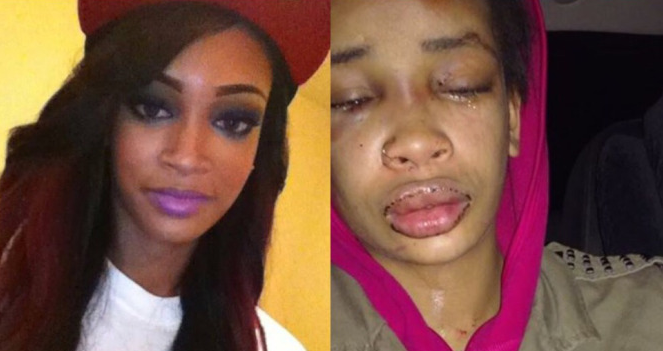 The young lady pictured above is Myriah Pointer. She was jumped by girls she before this thought were her friends. Porter has now taken to social media to bring attention to how she was setup by her friends and savagely beaten.

The woman says she went to the local police in her hometown of Atlanta, but they didn’t listen, the cops are treating her like she made this up.

She was left with no other choice but to take her story and post it on Facebook, showing her before and after pictures, and telling the awful story of how three young women, two who she considered to be best friends, set her up while holding her down and taking turns stomping on her until she passed out.

After posting her story online the video of the women beating has went viral on the Internet.

“Once I gained conscious, they were still beating and stomping me,” she wrote on her Facebook page. This went on for about three hours and they threw me and cracked my phone and hid my battery for another hour.”

Pointer has expressed that she feels blessed to be alive, but now she just wants justice for the crime that was committed against her.