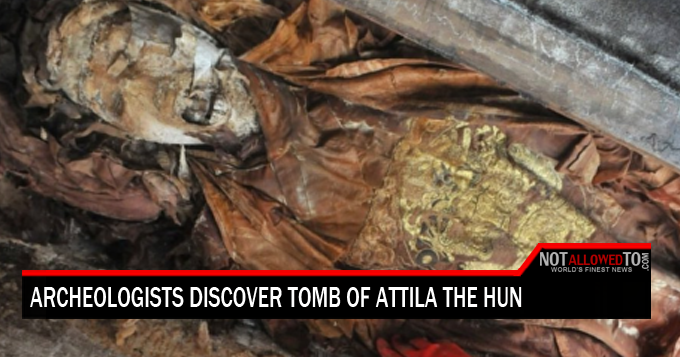 Budapest, Hungary – Construction workers have unearthed a spectacular 5th century sepulchre. The analysis of the monument revealed that it was the burial chamber of King Attila himself.

“This site is just incredible!” explains Albecht Rmschtein, an historian from the Lorand Eötvös University in Budapest. “We found many horse skeletons, as well as various weapons and other artefacts, all traditionally associated with Huns. These objects include a large sword made of meteoric iron, which could certainly be Attila’s legendary “Holy War Sword of the Scythians”, allegedly given to him by the god Mars himself. In fact, this definitely seems to be the resting place of the almighty Attila, but further analysis needs to be done to confirm it.”

Nicknamed “the scourge of God” by roman historians, Attila was the ruler of the Huns, a nomadic people originating possibly from Central Asia. He ruled from 434 A.D., until his death in 453 after a feast celebrating his latest marriage to a beautiful and young gothic princess named Ildico.

He led many military raids on both the Eastern and Western Roman Empires provoquing what has become knowned as the Barbarian Invasions or the Great Migration, a large movement of germanic populations that greatly accelerated the fall of Rome and the advent of the Middle Ages in Europe. He his considered by most Hungarians, as the founder of the country.

The discovery of this funerary site could bring many clarifications concerning the origins and identity of the hunnic people and of Attila himself, which have both been sources of debate for centuries.

The analysis of pieces of pottery and jewelry found on the site, should bring a new light on their cultural origins and trade networks, and help scientists better understand this badly documented people.