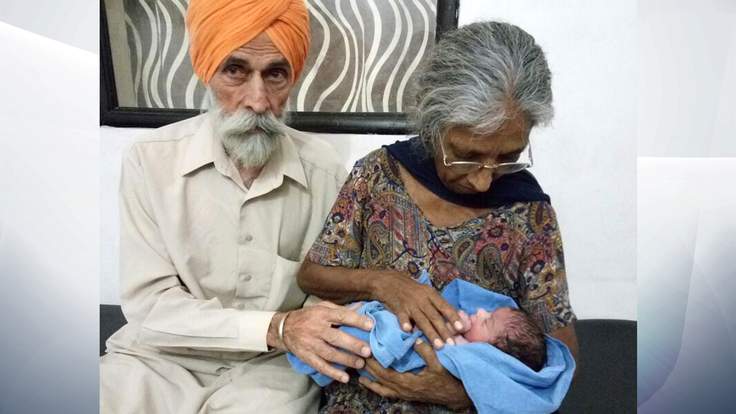 INDIA | A woman who has given birth at the age of 72 through IVF treatment says her life is now complete.

Daljinder Kaur and her 79-year-old husband became parents last month following two years of treatment at a clinic in the northern state of Haryana.

The baby was conceived using the couple’s own egg and sperm and, despite being very small at birth, weighing just two kilograms (4.4lbs), was now “healthy and hearty”, the National Fertility and Test Tube centre said.

Mrs Kaur said she did not believe she was too old to be a first-time mother and said she felt very well and fit enough to cope.

She said she and her husband of 46 years had almost given up hope of ever having a child and had faced ridicule in a country where infertility is sometimes seen as a curse from God.

“God heard our prayers. My life feels complete now. I am looking after the baby all by myself, I feel so full of energy. My husband is also very caring and helps me as much as he can,” Ms Kaur revealed. “When we saw the (IVF) advert, we thought we should also give it a try as I badly wanted to have a baby of my own,” she said.

Her husband, Mohinder Singh Gill, who owns a farm outside Amritsar, said he was unconcerned about their age, saying God would watch over their child whom they named Armaan.

“People say what will happen to the child once we die. But I have full faith in God. God is omnipotent and omnipresent, he will take care of everything,” he said.

The fertility clinic said that they were initially unsure about going ahead with the treatment, but tests indicated the mother would be able to carry the unborn baby.