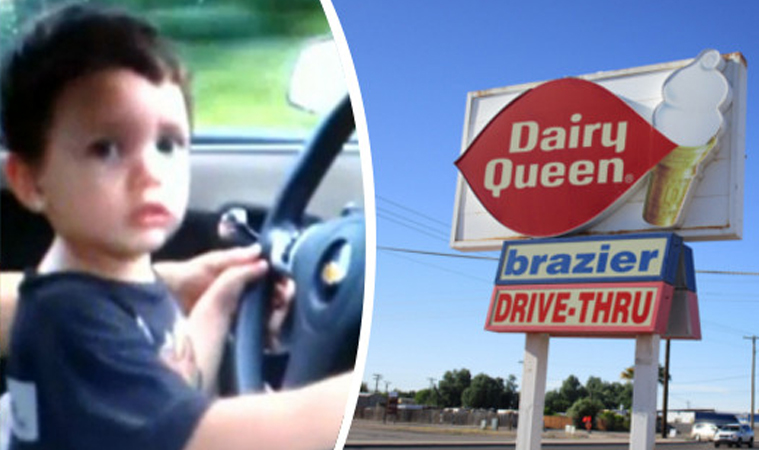 FLORIDA | A 3-year old boy showed some incredible resourcefulness after his mother left him in the car with his younger sister for more than an hour.

According to report, Thomas Blackburn’s mother left him in her Truck, with his 22-month old sister Alicia while she was getting a manicure and a pedicure in downtown Tampa Bay.

After waiting more than an hour, the children were suffering from the heat and from dehydration, so the young boy decided to drive to one of the two restaurants that he knew, in order to get some ice cream.

The ingenious kids successfully maneuvered the Ford F-150 pickup truck as a team, the young boy holding the steering wheel while his sister was handling the pedals.

Miraculously, the apprentice drivers drove 17 miles across the city without causing any accident or hitting any obstacle, going all the way from the beauty salon to a Dairy Queen restaurant.

The young boy says he wanted to get some ice cream and head back before his mother noticed that they were gone, but he was spotted by police officers while he was waiting in line at the drive thru.

Lieutenant Emilio Scala who intercepted the young driver, says he was impressed by the toddler’s reaction when he approached him.

“He just opened his window and asked, “What’s wrong officer, was I going to fast?”. I could see his sister on the floor, pushing on the brakes with her hands… It was completely surreal!”

Lt. Scala says he first thought that he was being pranked and looked around him, trying to spot the TV cameras.

“I just couldn’t believe that these kids had driven even one mile without hitting anything. I mean, the boy hardly saw over the steering wheel. It’s a miracle that no one one was killed.”

The custody of the children was entrusted to the father until the end of her trial, which should begin next Monday.

According to the psychologists who examined them, the children didn’t realize they were in danger and perceived the entire incident as “an exciting adventure”.

He believes the children will, therefore, suffer no long term trauma or other negative consequences from the incident.