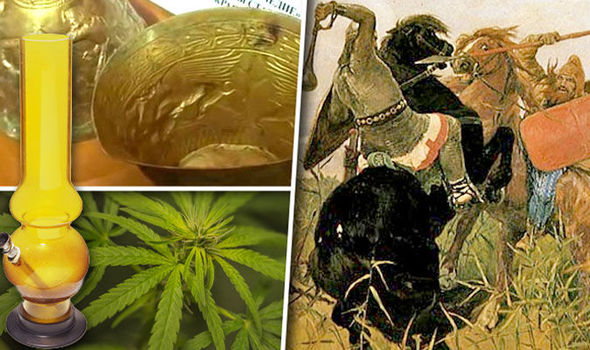 Archaeologists have discovered two 2,400-year-old pure gold ‘bongs’ that were used by tribal chiefs to smoke cannabis during ceremonies.

When workers dug an area of land in Russia these historic drug items were found with 7lbs of other gold items. The items had been buried in a chamber lined with stones before being concealed by a thick layer of clay.

According to reports and tests carried out by researchers and criminologists the thick, black residue found inside the vessels comes from the cannabis and opium which the tribal royal smoked.

It is believed that the items belonged to the Scythians, a nomadic warrior race who ruled large swathes of Europe and Asia between the 9th century BC and the 4th century AD.

Historians say the Scythians smoked, and sometimes brewed, a strong concoction of cannabis and opium in order to alter their state of mind before heading into battle.

Greek historian Herodotus, who died in 425BC, wrote: ‘Scythians used a plant to produce smoke that no Grecian vapour-bath can surpass which made them shout aloud.’ The dig also led to the discovery of golden cups, rings, and neck rings. All the items have since been cleaned and put on display in a Russian museum.